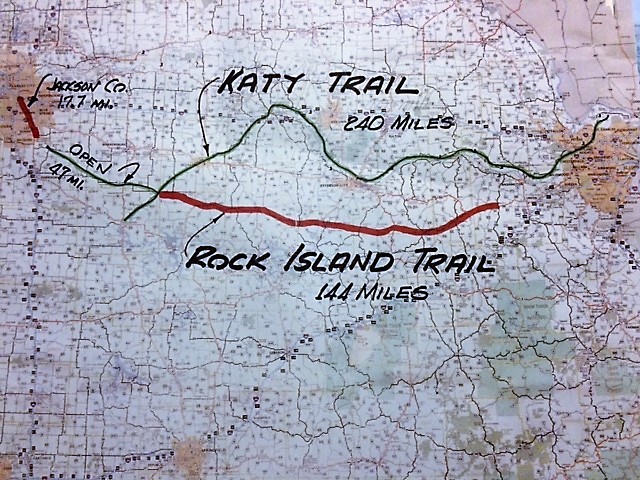 DEDICATED TO PRESERVING THE HISTORY OF THE ROCK ISLAND CORRIDOR AND BUILDING A HIKING AND BIKING TRAIL.

Our history begins in the early 1900s when The Rock Island Railway was built. Small towns developed along its length. When rail traffic was discontinued in the 1980s, many of the communities also began to decline. MORIT has a vision to turn this unused resource into an easily accessible walking and bicycling trail. As you will see as you explore these pages, rails to trails projects greatly benefit communities. Because rail corridors generally have a 2% or less grade, trails built on former rail beds are easy for anyone to use. They provide free access to physical fitness activities for all. Rail trails also provide safe routes for children to walk and bike to school. They provide economic opportunities as hikers and bikers purchase food, rent lodgings, and take advantage of other local venues. Trails increase land values along the trail. All these benefits and more are possible when the Rock Island Corridor is converted to a hiking and biking trail.

The long-awaited rail-banking agreement between Missouri State Parks (MSP) and Missouri Central Railroad (a subsidiary of Ameren) was signed on December 17, 2019.  The gift of the 144 mile former Rock Island Railroad corridor https://mostateparks.com/rockislandlinecorridor provides Missouri the historic opportunity to enhance the quality of life in 20 rural communities and provide them an economic boost. It will extend the 47 mile segment that opened December 2016 near Kansas City another 144 miles to greater St. Louis. Further, Ameren’s gift agreement allows a trail alongside of rail an additional 13 miles to Union. The 204 mile Rock Island Trail will be the 4th longest in the nation and form a loop with the longest.

A world-class loop of the 240 mile Katy and 204 mile Rock Island trails will have only a 7 mile gap between Union and Washington, where the new bridge over the Missouri River is bike-friendly. Jackson County is adding 14 miles of Rock Island Trail to I-70 https://www.jacksongov.org/776/Rock-Island-Rail-Corridor-Authority. The rail-banking gift agreement includes a contingency, “The agreement requires approximately $9.8 million be raised before the property will be transferred to the department to help cover initial development, security and management costs.” The deadline to complete the transfer is December 31, 2021. The nonprofit Missouri State Parks Foundation has contracted fundraising firm Hartsook to raise the $9.8 million startup fund by December 2021. See https://www.missouristateparksfoundation.org/what-will-be-achieved-with-the-fund .

The first gift by the late Ted & Pat Jones for the Katy Trail was the purchase of the corridor. Likewise, Ameren is donating the Rock Island corridor as part of a several million dollar investment. At the request of MSP, Ameren paid to remove the ties instead of moving them to the side as was done on the first 47 mile segment. Ameren paid for the survey before the rails were removed to clearly establish the boundaries of the future park. Ameren has placed concrete barriers in front of the three tunnels and every major bridge, plus barbwire fencing and No Trespassing signs at every major road crossing. At the request of MSP, Ameren commissioned a Phase 2 environmental study. The two-year salvage of the 144 mile corridor was completed in summer 2018.

The Missouri Chamber of Commerce notes significant economic growth in communities along the first 47 miles https://mobizmagazine.com/2017/08/17/plans-for-rock-island-bike-path-prompt-small-town-entrepreneurship/. New trail-related businesses have already sprung up along the next 157 miles. Towns every few miles already have restaurants, convenience stores, lodging, grocery stores, ice cream and frozen custard shops, wineries, bars/grills, parks, camping, a craft brewery and a distillery. There is a Walmart within a half mile of the corridor at Versailles, Eldon and Owensville. The trail will connect KC to Missouri’s largest state park at Lake of the Ozarks, and fill a long gap between state parks https://mostateparks.com/page/57778/locator-map.

The next 157 miles of Rock Island Trail are expected to produce a 20:1 direct return on investment. Economists often estimate an additional 3:1 in indirect multipliers. Missouri State Parks budget is limited to a 1/20 of 1% sales tax and whatever they can generate https://mostateparks.com/page55069//parks-soils-and-water-sales-tax. MSP budgets less than $700,000 per year to operate the 286 miles of Katy/Rock Island trails ($2,448/mile) https://mostateparks.com/sites/mostateparks/files/Datasheets_Katy.pdf.

In most trail towns the Rock Island will be the non-motorized alternative to the main highway. The new infrastructure will encourage users to walk or bicycle to work, school, restaurants and stores. An improved quality of life will make trail communities more desirable to new residents and industry. Property values will increase, with the highest impact being nearest the trail https://cafnr.missouri.edu/2013/04/happy-trails/.

Tourists will be thrilled http://www.railstotrails.org/trailblog/2016/december/05/missouris-rock-island-trail-state-park/. Spectacular bridges span the Gasconade, Osage and Maries Rivers as seen in short videos at https://vimeo.com/203368673″ target=”_blank” and https://vimeo.com/238664842. Its 3 tunnels are 2-5 football fields long, with the longest being at Eugene. The Katy/Rock loop is easily accessed from international airports in St. Louis and Kansas City, numerous national airports, multiple Amtrak stations, and Interstate 70.

In 2012, Katy Trail State Park was found to have a direct economic impact of more than $18.5 million per year https://mostateparks.com/sites/mostateparks/files/Katy_Trail_Economic_Impact_Report_Final.pdf. The Rock Island is expected to have even more usage and economic impact per mile because it runs through the middle of towns every 2-10 miles, and along their major highway. More than 10% of the corridor is in the city limits of towns. A full 41% of Missourians live within 50 miles of the corridor https://rockislandtrail.org/wp-content/uploads/2019/11/Rock-Island-Trail-Opportunity-Report-MU-Extension-2018-Final7.pdf. Dormant properties are primed to become trail-related businesses http://www.joplinglobe.com/news/lifestyles/andy-ostmeyer-rock-island-rocks-windsor/article_3fc6d78b-45f7-514d-9bb6-fd7cece53a1a.html.

Long distance trails are a priority (https://mostateparks.com/sites/mostateparks/files/ExpansionPlan1992.pdf pages 18-19). Governor Parson introduces the recently completed Statewide Comprehensive Outdoor Recreation Plan (SCORP): “The purpose of the report is to identify outdoor recreation issues of statewide significance and evaluate the supply and demand of outdoor recreation resources in the State.” The second of seven broad goals is “Expand Missouri’s statewide trail system and promote trails as a critical component to engaging in an active and healthy lifestyle.” https://mostateparks.com/sites/mostateparks/files/2018-2022%20Show%20Me%20the%20Great%20Outdoors_SCORP_Final.pdf.  The Rock Island Trail State Park Endowment was created in 2019 to hold monies from any source for the new state park (page 3 of https://www.senate.mo.gov/19info/pdf-bill/tat/SB196.pdf).

MSP notes its current utility: “The corridor is being used by locals for both transportation and recreation.” https://mostateparks.com/sites/mostateparks/files/RILC_EngineerReport_Summer2018.pdf. Towns are interested in partnering to maintain, develop and operate their segments. City parks in Versailles, Eldon, Belle, and Owensville could serve as trailheads by sharing their existing parking, water and toilets. Freeze-resistant fountains could be sponsored to offer water to locals and visitors year-round.

Grant funding for trail construction is widely available. MSP itself manages roughly $4 million per year in grants for trail and parks. They award up to $250,000 per project in RTP and LWCF grants. The 56 mile segment from Union to the Gasconade River would be the simplest to develop, is near St. Louis and the Katy, and would benefit 9 towns. Engineers estimate a cost of $750,000 to repurpose its two bridges for trail use. The key to success will be creative public/private partnerships with communities, individuals and philanthropists. MoRIT is committed to finalizing management of the Rock Island Trail by the end of 2021.